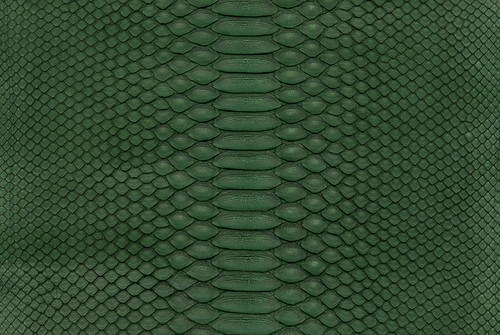 SKU:
PBFI402
UPC:
Bulk Pricing:
Buy in bulk and save

Python skin is commonly used for handbags, footwear, garments,upholstery,  belts, wallets and other small leather goods. The python skin species processed by PanAm Leathers are native to Southeast Asia. These species include the reticulated python or diamond python (python reticulatus) and the Borneo short-tailed python (python breitensteini). Pythons are mostly wild caught, while some small amount of ranching does exist. In both cases, the skins are a byproduct of the meat. Approximately 2 billion people worldwide eat reptile meat as a source of protein, mainly across East and Southeast Asia, Africa and the Southeast USA. Other parts of the animal other than the meat are also used in specialty dishes and pet treats. The demand for python skin exploded in Europe in the 1930’s and since a formalized international trade has since been developed. This material is known for its lush and supple feel, making it as easy to cut and sew, as it is to wear. The python skin scaling pattern is an unmistakable and all-time classic in high-luxury fashion and interiors.

Python skin can be cut in two different ways: back cut or front cut. Back cut, a skin cut down the back, shows the wide belly scales running down the center of the skin. Front cut, a skin cut down the front, shows the smaller, more circular scales in the center with the wider scales at the outer edges. The diamond python skin is available in both cuts, while the short-tailed python skin is only available in back cut.

Below are the average yields in cm of each size category of each specie of python. For example, a short-tailed python in the 25/28 cm size range, stays 23 cm wide for approximately 20 cm long. These figures can help estimate the specie and size of skin that would be ideal for the panels on any given project or product.

Python is typically soft and flexible with a medium-high drape, making it easy to cut, turn, fold, bend and sew. Of course, different finishes can affect the feel of the python in various ways. For example, skins with a glazed finish or a finish with heavy pigments will make the skin more rigid.

Sustainability and Ethics for the Python Skin Trade

The python scores a 7 out of 10 in the PanAm Leathers Sustainability and Ethics Rating System. In biodiversity and meat use, it scores perfectly. On ethics, it scores a 1 out of 2, because the scientifically-backed ethical standards for how these animals are treated are still being developed and implemented, but steady progress is being made. On conservation, it scores a 2 out of 4 because it is CITES Appendix II, meaning the specie is not as in danger but must be trade-controlled to prevent exploitation.