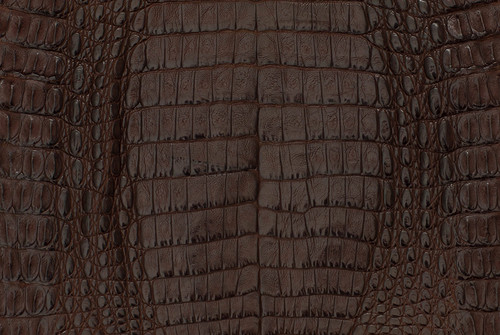 The caiman crocodile used by PanAm Leathers is mostly the caiman fuscus or the “brown caiman,” native to Northern South America and primarily the coast of Colombia. These animals are bred in a closed-circuit ranching system, meaning the animals are bred, hatched and harvested on the ranch. The caiman is a smaller, bonier species of crocodile.

The caiman skin is commonly available in two cuts: belly and hornback. The caiman belly is smoother and flatter in the center, as this is the part of the animal on which it moves around. The caiman hornback is the top armor of the animal which protects the animal from the elements throughout its life. It has pronounced bones running up the center of the skin.

In South America, the commercial hunting of caimans began in the late 1950s, beginning with the Black Caiman (Melanosuchus niger), whose skin is regarded as the most valuable of the caimans. When wild Black Caiman populations dwindled and hunting was not profitable, other caiman species (mainly Caimancrocodilus in the Amazon basin) were targeted. The skins of some species (e.g. Dwarf Caimans, Paleosuchus spp.) were not commercially valuable due to large bony deposits, and so were not hunted except for subsistence use by local people. Fortunately, over the past 40 years, a collaboration of private businesses and international, national and state agencies have pioneered a compelling sustainable-use system that has protected the species, their habitat and the local communities they inhabit.

Caiman belly skins have been widely touted in the handbag sections of department stores and in the Westernwear business. Caiman belly is best known for its structure and distinct bone pits in the center of the scales, as well as their affordability relative to other crocodile hides.

Caiman belly is a bonier skin, relative to other crocodile hides, making the hides more rigid and leaving bone pitting marks in the scales. The scales themselves are medium to large-sized for the same size crocodile. The texture and durability of caiman skin is incredibly unique. It is naturally scratch-resistant and water-resistant, making it a perfect material for structured handbags and footwear.

PanAm Leathers grades caiman belly on the midsection only, including the belly and flank. The condition of the head and tail are not considered in the grading. The grades are defined as follows:

Defects are most often scars, scratches, shading or scaling deformities. In some rare cases, defects may include small holes and grain issues.

Caiman belly is measured in cm at the widest point of the belly. The most common method of measurement is from outer edge to outer edge, which is called “outside measure”. In some cases, skins are measured from the center of the first hard bone to the center of the first hard bone on each side of the belly. This is called “inside measure”. PanAm Leathers uses outside measure because it is more straightforward, leaving less up to interpretation. Below are the average dimensions of each section of the skin for each size category. All measurements are in cm, except for average thickness which is in mm. Caiman belly is mostly stocked in 30/39 cm.

Sustainability and Ethics for the Caiman belly Trade

The caiman scores a 5 out of 10 in the PanAm Leathers Sustainability and Ethics Rating System. In biodiversity and meat use, it scores perfectly. On ethics, it scores a 1 out of 2, because the scientifically-backed ethical standards for how these animals are treated are still being developed and implemented, but steady progress is being made. On conservation, it scores a 2 out of 4 because it is CITES Appendix II, meaning the species is not in danger but must be trade-controlled to prevent exploitation.

The legal exotic skin trade is an amazing force for good. PanAm Leathers’ curated, sustainable supply chain maintains wild reptile populations and their habitats, feeds over two billion people globally, supports less fortunate local and national economies and promotes science-backed animal welfare principles. Our industry has invested heavily over the past few decades in research and implementation of policies and procedures to make sure we are sustainable. Now, we want to work just as hard to communicate what we are doing and how and why we are doing it, so that our customers can understand and explain it to the people that matter to them.

It is supremely important to us that our business is sustainable and ethical. The trade of exotic skins has been around long enough now that we, and the agencies and organizations that provide oversight, have had plenty of time to figure out how to do good and well at the same time. We want to make sure that the net result of our trade is that people, animals and places are better off. If animals are going to be sacrificed, it needs to be for a greater good.

To date, we have been proactive about implementing ethics and sustainability standards in our supply chain, but we have not been as good about communicating on it with our customers. When we sell, we communicate about our quality, selection and service; and our customers have always made their buying decisions accordingly. But it is becoming increasingly important to our customers that we deliver on sustainability and ethics as well.